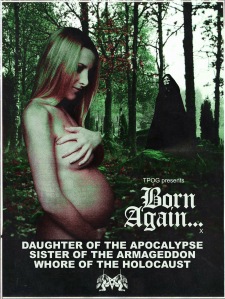 Back in 2012, I started work on a self-published art book documenting the first three years of my record label. The book would have interviews with each band I had released to go alongside the pictures. The Goatess had already designed my logo and the cover of Planet Doom Volume 2, my second compilation CD, so I decided to approach her for some cover artwork. Seeing as she was the cover artist, I thought it might be cool to interview her and have a section in the book all about her artwork and the bands she’s done album artwork for (which include Pentagram, Church of Misery, Stonehelm and the forthcoming album from my own band, Iron Void).

Things started off well, and the Goatess section was shaping up to be the strongest section of the book. Unfortunately, I was a bit overworked at the time, balancing a full time job, running the label, a part-time Open University degree and my band commitments (it was a busy time!). The book suffered as a result and the release date kept getting pushed back further and further. In the end, I decided to keep the cover art and the title, which I used for the Doomanoid Records third anniversary sampler The Story So Far, but the book itself never saw the light of day.

Here it is at last, the original interview which we conducted via Email in 2012.

First of all, thanks for taking the time out to do this interview. You have established a cult following online over the last few years. You are known for your cult horror and exploitation film-inspired artwork which always features your unique sense of humour. How did you get started?

Hi Steve! Thank YOU for giving me this opportunity of being interviewed!

I guess it all started when I decided to create a fan / tribute page to Classic Rock and Metal, on MySpace, and I thought I’d add a few of my artworks into the mix to coincide with the vibe of the webpage. I found that I was getting a good response from people regarding the artwork! So it encouraged me to add more…and a monster was born! Ha ha!

Have you had any formal art training?

I studied Art and Design, and Photography, though everything I do on the PC is self-taught.

Did you intend to create cover artwork and logos for bands and labels or did you just make ‘fan art’ that people liked?

I was sort of just doing my own thing, then found a lot of people were into it. Shortly after I was asked, by bands, if I would be interested in doing some artwork for them and it just grew from there.

Much of your artwork has a cut and paste style. Do you rely heavily on computers (Adobe Photoshop etc.) and have you made artworks without using them in the past?

I started off working with oil paints some years back, but this became very time-consuming and costly. That’s when I decided to switch over to computer made art! These days nearly everything I do is on the PC, although occasionally there are some more hand-drawn elements. I do like the cut-and-paste style! I think it’s very reminiscent of how things were done in the ’60s and ’70s, which is something I’m really into. I love creating that retro, old school look! If you look at some of the artwork back then (i.e.Top Of The Pops album covers, etc.), it was unashamedly cheesy, and I kind of like that!

Ah yes! The MySpace (witch hunt) years! I think they were out to get me! Ha ha! It got to a point where I gave up on uploading anything there, as it was deleted almost immediately. I think that for adults to censor other adults, especially in music, film and art, is ridiculous! People have the right to make up their own minds.

I guess there have always been Justin Biebers in this world; at least we can offer an alternative to that mainstream, manufactured bullshit. As long as our hearts are in it, we will never die out!

We are often told via the mainstream media that we live in a society where ‘anything goes.’ Have you found that to be the case, or have you had to tone down your work for public consumption (for example album cover art or posters).

I think ‘anything goes’ regarding what you see on the news. We have become numb to real violence and horror. Yet people seem to get offended by fantasy and fiction, and certainly by any sexual imagery.

I was asked by a promoter for a well-known band to design a poster for the European leg of their tour. He asked me for some designs which represented ‘pure evil’, which I made, but then he told me he couldn’t use them because he found them too disturbing and wouldn’t be able to post them in public places! So, unfortunately, they never saw the light of day…

Do you care about how much money you make out of your artwork, or do you do it more as a hobby (with money as a secondary consideration)?

It’s nice to make money from something you are passionate about. To be able to do this as a full-time job would be a dream come true. Primarily I make art because I enjoy creating it, and I get a buzz out of other people also enjoying it, though it’s always a plus when I get asked to design something professionally!

Which bands and labels (beyond mine) have you produced artwork for, and what would you say has been the highlight thus far?

I have produced artwork mainly for Emetic Records. Regarding bands, I have created art for Stonehelm, Buzzoven, Church Of Misery, Ice Dragon, Atlantic Tide, to name but a few! The highlight has to be when I was asked to design the cover for Pentagram’s “Sub-Basement” re-release! It was a real honour to provide artwork for such an iconic band! 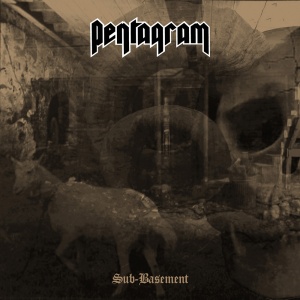 You seem to be quite an elusive figure. Not many of your fans know your real name, and we have never met in person. Do you think that your real-life personality is anything like the image portrayed on your artwork and web pages?

“The Goatess” is definitely my alter-egoat! You could say I live out some of my fantasies through my art!

I’m always fascinated by the person who hides in the shadows, they create their own mystery and enigma. I think it’s more fun for people to imagine who and what you are… “What’s behind the mask?”

You have your own ‘Goatess Appreciation Society’ fan page on Facebook. Do you think you would have reached this many people without social networks?

Well, “The Goatess Appreciation Society” came as a big surprise to me! It was actually created and brought to life by Chritus Linderson of Lord Vicar! I was very flattered and humbled, to say the least! Social Networks have definitely been a main key in getting my artwork out there! It blows my mind how I get feedback from all over the world! It certainly wouldn’t have happened pre internet!

I’d like to back to your influences now. Are there any lesser known movies books and music that you would like to recommend to the readers?

Regarding my influences, I’d say that the films of Jess Franco and Jean Rollin play an important part, as well as “Psychomania” and “Queens Of Evil”, and of course H.P. Lovecraft, William S. Burroughs, and the artwork of H.R. Giger and Joel-Peter Witkin. There are so many!

Music-wise, check out Weekend Beast! They kick ass! Also, if you get the chance, tune into The Toby Mearing Show (online radio). Toby plays some really cool and rare underground stuff!

Thanks for taking part. Is there anything you would like to tell readers as a closing comment? Also, where can people see more of your artworks?

It was my pleasure! People can check out my artwork on www.facebook.com/goatess

I’d like to say, “Beware the beast man, for he is the devil’s pawn. Alone among god’s primates, he kills for sport or lust or greed. Yea, he will murder his brother to possess his brother’s land. Let him not breed in great numbers, for he will make a desert of his home, and yours. Shun him…for he is the harbinger of death.”