2013 was a landmark year for me. I achieved three lifetime ambitions in twelve short months. My band recorded their debut album (which I’m proud to say will be released soon by an actual record label!), I completed a degree in English language and Literature and I attended my first ever Roadburn festival in Tilburg, Holland with four friends.

I managed to get up before dawn and get the first train to Manchester airport. I actually flew to Amsterdam without freaking out (this was easy as I’d already been forced to conquer my fear of aviation by flying to Malta the previous year) then endured the gruelling rail journey to Tilburg.

By mid afternoon, we were there. A shuttle-bus took us to the children’s Safari park that would be doubling up as our camp site during the festival. After some confused tent -building, I was all set. 013 Venue here we come!

There were many good points about my first Roadburn. I saw more bands than I thought humanly possible in such a space of time, and even then I had to miss much of what was going on to squeeze them all in. As a doom fan, I focussed mainly on the heavier, slower bands but I did manage to catch a late-night set from death metal band Asphyx at Het Patronaat one night (the former church turned venue at the side of the main 013 Venue festival site). Highlights for me were High on Fire (who performed two full sets on different nights), Electric Wizard, Cough, Pilgrim, Witchsorrow, Victor Griffin’s In-Graved and my personal favourites Witch Mountain. 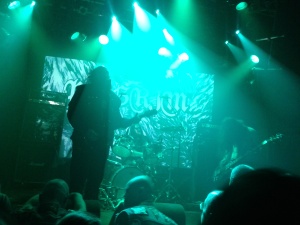 Pilgrim on stage in The Green Room, Roadburn 2013

We got to meet up with many familiar faces old and new, and smoking cannabis indoors with impunity was pretty novel, too.

There were downsides, though. The beer wasn’t up to much, and it was very expensive, as was the food. With hindsight, it would be easy to go round the corner to an actual business and buy something to eat instead, but that would have made it harder to squeeze in all the bands. I spent a fortune, but who cares?

If you are thinking of taking the camping option for your Roadburn trip, I would advise wrapping up warm. For reasons unknown to myself, I travelled in a thin denim jacket and took only t-shirts with me. Even wrapped in a sleeping bag fully clothed, the nights were horrendously cold. I will never forget how cold they were. This was my own stupid fault, and if/when I do go back, I am taking a hoody and maybe an extra jacket too. I must have thought I was travelling light and it would be easier. Of course, I was wrong.

It was an amazing trip. Most of the pitfalls would be avoidable to a more seasoned traveller and I would go back in a heartbeat. So how come I’m not going?

The short answer is money. I simply do not have funds to spare for the ticket and camping, flights and spending money. The tickets sell out fast, too, so there will always be potential punters left out in the cold. I like the idea of Roadburn, and I’m glad I went.

My concern is, it is going to become a luxury for those who can afford it, rather than an experience worth having for those that really need to go (even if they only go once).

Maybe I’m just bitter because I haven’t been in constant employment these last twelve months and couldn’t raise the cash to buy a ticket. Maybe the truth is I care more about funding my own musical endeavours than supporting someone else’s (I joke about going back to Roadburn when they book us to play there, and I usually mean it). I could have bought a new guitar with the amount I spent last year. Maybe this is all just loser talk to take my mind of the fact that I am not going to Roadburn this year.

You know what this is?