When I see the word ‘heist’ in a film’s description, my natural instinct is not to watch it. It reminds me of Ocean’s Eleven and Snatch, movies that I have very little interest in watching. Mix that word with zombies, however, and you stand a chance of turning my head.

Zack Snyder’s latest offering, a prequel of sorts to his Dawn of The Dead remake, was released on Netflix last month. It has more than a whiff of the Ocean’s Eleven about it, including a handpicked squad of mercenaries working for a shadowy crime boss, all out for themselves and prone to stabbing each other in the back. Despite this ominous premise, encouraged by the impressive visuals and the promise of some zombie ass-kickery in 4k, I pressed play.

END_OF_DOCUMENT_TOKEN_TO_BE_REPLACED 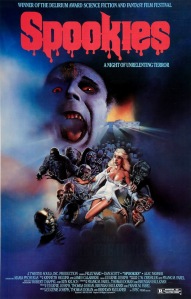 Spookies harks back to that glorious time for American horror films – the mid to late 1980’s. It has the perfect mix of stereotypical teen characters (all played by actors that are well into their twenties, in line with horror tradition) and incredible special creature effects that still look good today. No CGI here – all the effects were done with puppets and models, giving them a solid, believable look that is sadly missing from today’s horror movies. END_OF_DOCUMENT_TOKEN_TO_BE_REPLACED

“Your Pain is her pleasure.” 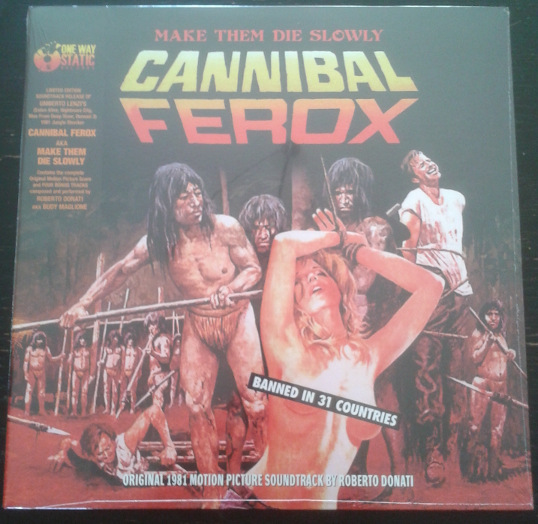 The cover art is awesome!

“I detest Cannibal Ferox… it’s the only movie in the bunch of horror/gore/splatters that I was in in the ’80s that I regret and wish I didn’t appear in.”

If ever there was a movie that could be termed controversial, it is the 1981 exploitation horror Cannibal Ferox. Directed by prolific Italian film maker Umberto Lenzi (Eaten Alive, Nightmare City, The House of Witchcraft), Cannibal Ferox is a tale of cocaine, academic curiosity and death.

And I love it! END_OF_DOCUMENT_TOKEN_TO_BE_REPLACED

According to Wikipedia, “Horror is a film genre seeking to elicit a negative emotional reaction from viewers by playing on the audience’s primal fears.”

Why would anyone choose to spend their time viewing a genre that affects them in an emotionally negative way? What kind of masochism is being indulged in here? I’m usually too busy watching my favourite classic horror films to care why I enjoy them, but it’s something I’ve been thinking more about lately.

The fact is, some of us get a kick out of being scared. This is a universally accepted fact. The question is, why do we enjoy feeling threatened by imaginary monsters, vampires and ghosts? END_OF_DOCUMENT_TOKEN_TO_BE_REPLACED

“A terrifying, screaming plunge to the depths of Hell!” 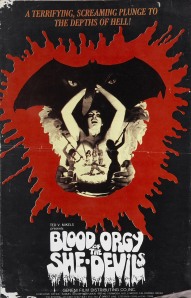 Produced by Ted V. Mikels (Astro Zombies, The Doll Squad), this film has a one-star rating on its IMDB page. Despite this less than encouraging first impression, I was determined to give the film a chance. After all, someone had kindly uploaded it on to Youtube so I would be watching for free. I had nothing to lose and I can’t resist an obscure old horror with witchcraft and scantily-clad actresses. In fact, the one-star rating piqued my interest. If the general viewer considers the film to be complete garbage, then it just might turn out to be a hidden gem!

Of course, the film does not entirely live up to it’s title, but it does feature some scenes that attempt to depict witchcraft.

Lila Zaborin stars as Mara “queen of the black witches.” She presides over a coven of impressionable teenage girls (who also happen to be reincarnated witches!) and performs demonstration rituals for them for a living with a view to teaching them the secrets of the Black Arts.

While these rituals are taking place, Dr. Helsford (an expert on witchcraft) meets with two students, Mark (Tom Pace) and Lorraine (Leslie McRay). He attempts to explain the historical truth behind witchcraft, and goes into some detail about the real life witch trials that took place in centuries past. There is a relatively chilling reenactment of a witch being burnt at the stake about mid-way through the film. This is one of the most interesting scenes along with the Mara coven scenes, which build in intensity as the film reaches its climax.

The plot is not that engaging, and the acting and dialogue is beyond cringe-worthy. That said, it is worth a watch for fans of obscure 60’s and 70’s horror. If you discovered these films through bands like Electric Wizard and Cathedral, then this will be a good choice. It’s not a patch on The Living Dead at The Manchester Morgue (this film makes it look like Shakespeare!), but is does have some cool retro scenes for connoisseurs of exploitation cheese. Visually, it’s the kind of film you would expect to see projected behind a band at the Roadburn Festival.

Remember: You can find the whole thing on Youtube for free, but to be honest the two-minute trailer I’ve included here covers all the best bits!

Ah, remakes. There seem to be more and more of them being released these days, and fans have very strong opinions about them. In the last few years we’ve seen slick 21st century “re-boots” of I Spit On Your Grave, Halloween, Dawn of The Dead, Total Recall, The Wicker Man (Oh God, if only I could wash out my mind with soap and water!). The list is endless. There is even a re-make of Robocop due out in cinemas next month. If I am totally honest, I may not have courage to go and see the theatrical release. I value my cherished memories of the Paul Verhoeven original to much to risk sullying them with a sub-par “re-imagining”. You just know the damned thing will be awash with slick editing and state-of-the-art CGI and totally devoid of the cult vibe that made the original so entertaining. If and by that I mean if I do go and see it, I will write up a comparison here, once I’ve recovered from the inevitable disappointment.

I suppose the real question I should be asking myself is how did I become so jaded and cynical? The truth is, I don’t know. There is just something about modern movie-making that leaves me cold. It’s no one thing, but a combination of factors. They just seem too slick somehow. Too… Polished. And above all, too dark. I know the whole point of remakes is to shed the kitsch, cheesy vibe of the originals and appeal to a hip young audience (who simply were not born when the originals came out). I can relate to that but at the same time, that was what made the originals so special. Classic cult films (of any genre, but particularly horror) have a special atmosphere, a vibe, that cannot be recreated in today’s modern, high definition era. Many have tried, and done a reasonable job at it. Robert Rodriguez largely succeeded with Planet Terror a few years back, and the Soska Sisters films have kicked ass so far. It’s definitely possible, but rarely happens. Another factor is budget. Studios are under pressure to deliver a production quality that will appeal to this generation of movie goers, not just thirty-something horror and heavy metal nerds with a chip on their shoulder (i.e. me!). This, for me is the key issue. Only a fan would make that conclusion but here it is anyway. They are too well made. The quality is so good and the picture is so clear that there is nothing left of that grind house vibe that made them special in the first place. I feel the same sense of anti-climax with most mainstream rock and metal albums. They’re OK, but they are really too clean. I prefer underground stuff with that special quality that, while they may not be as well produced in the technical sense of the word, keep me coming back for more literally years after I bought original disc.

So… On to Evil Dead…

END_OF_DOCUMENT_TOKEN_TO_BE_REPLACED

Prison is a supernatural horror film directed by Renny Harlin (Die Hard 2, Cliffhanger, The Long Kiss Goodnight). It’s one of a growing number of ’80′s horrors that passed me by before the DVD-era. I have never seen it on TV and I don’t remember its theatrical release (I can vividly recall Ghoulies, A Nightmare on Elm Street and Friday The 13th advertising campaigns, despite being far too young to see them at the time – I was born in 1979).

The film stars Viggo “Aragorn” Mortenson, back in the days when he used to appear in low-budget horrors (for another watchable example, see 1990′s Leatherface: The Texas Chainsaw Massacre III). He plays Burke, a young petty car thief who finds himself incarcerated in a newly reopened prison. The prison had previously closed some years ago because of the aftermath from an ill-omened execution. A prisoner (Charlie Forsythe) was wrongly accused of murder and sent to the electric chair. His ghost still haunts the prison, which, due to budget cuts, has been reopened

After a quiet first night, things start to go wrong. Burke and a fellow inmate are charge with reopening the execution chamber which (predictably enough), houses Forsythe’s ghost. An inmate attempts to escape, and is literally constricted by pipework and electrical cables when the prison’s inner workings come to life. A stream of gory and macabre incidents follow, with the corrupt warden (played by the late Lane Smith) carrying out increasingly harsh punishments on the inmates, while struggling to keep a hold on his own sanity.

Prison is a cross between The Shawshank Redemption and The Twilight Zone. It has plenty of supernatural scares, gory deaths and some really cool special effects that stand up well even today. Chances are you haven’t seen it, so I won’t spoil the ending. It’s well worth watching if you can find it on DVD. Like most of the cult horror films I will be reviewing here, however, don’t pay too much for it.